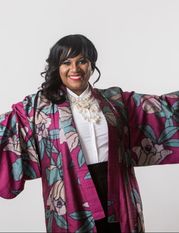 ​Cheryl Jackson is most popularly known to the nation as a Stellar Award winning Media professional. As a 27 year radio veteran, she brings humor and life to Christian radio.  Her bubbling personality along with her commitment to Christ makes for a wonderful and edifying listening experience.

Her career in radio started when she decided to pursue a higher education at Salisbury University in Salisbury, MD where she earned a Bachelor’s of Arts Degree in Mass Communication.  Directly from college, Jackson began her radio career at 90.3FM WDIH in Salisbury, MD.  From there she became a weekend host for two radio stations, WMMJ-FM Majic 102.3 in Washington, DC and WWIN-AM Spirit 1400 in Baltimore.  Jackson garnered her first Stellar Award as Program Director for WPGC-AM, Heaven 1580 in Washington, DC where she became one of the first Programmers to create and develop an Inspiration format.  She can currently be heard on Radio One’s WPRS-FM, Praise 104.1 in the Mid-day from 10am-3pm Monday – Saturday.  She has received numerous accolades; including a 2008 Stellar Award for Radio Announcer of the Year.  This year, Jackson will be honored as a “2018 Stellar Woman in Gospel”.

Not only is she a professional in radio, but Jackson is an Evangelist of the Church of God in Christ with a passion for youth.  Jackson attends Capital Temple COGIC, where she and her husband serve as the Coordinator of the Marriage Ministry.

Cheryl Jackson is married to Glendale “Dwight” Jackson and they have four children, (Desmond, Lahmar, Kayla and Darren) and two grandchildren (Aubrey and Aaron).

She lives by her favorite scripture, Philippians 1:6, “Being confident of this very thing, he which hath begun a good work in you will perform it until the day of Jesus Christ.”