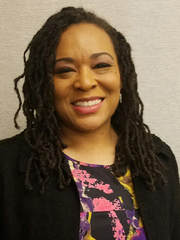 ​Kymberlee Norsworthy is a veteran public relations strategist who has helped define, develop, promote and protect personalities and brands for more than 20 years. She is a graduate of California State University, Sacramento, and holds a Master’s Degree in Journalism from Temple University. She is also a proud member of Delta Sigma Theta Sorority, Incorporated.

With a professional background that includes Head of Publicity for RCA Inspiration/Sony Music, as well as senior positions at award-winning public relations firm Rogers & Cowan and Interscope Records, Kymberlee is a versatile and creative executive driven by the desire to propel authentic voices into the forefront of a crowded marketplace.

This desire was birthed at a young age. As a high school student in Vallejo, California, Kymberlee discovered the vast limits of her performance abilities. Having tried out for cheerleading, and dance, and choir, it was clear that there was no place on center stage for her. Watching her friends and classmates from the audience, however, Kymberlee discovered, a gift for identifying and polishing the “center stage” talents of others, and began organizing events and talent shows that became main attractions throughout the Bay Area.

She later formed a talent company that would help support her through college and graduate school.

Kymberlee is the founder of Worth Ink Public Relations & Media Strategies, which handles publicity and media relations for music, entertainment and non-profit clients. She also founded the newly launched website This Gospel Life, which highlights and celebrates the dynamic lifestyle of faith.

While she was never a homecoming queen, Kymberlee is proud to have recently been crowned “Burpee Queen” by her fitness team – a testament to the inner athlete that she continues to nurture. She also teaches writing and public relations courses at Saint Peter’s University in  New Jersey.
When she was a freshman in college, finding her place in a world that had already told her in many ways that she would “never be anything,” Kymberlee read something that would become her lifelong mantra: “work like everything depends on you, pray like everything depends on God.”