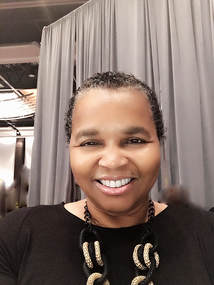 ​Sheilah Belle “The Belle” has worked in the field of broadcast news, journalism and with the press for over 30 years. She is the Editor-in-Chief and Publisher of The Belle Report now entering its 15th year of publishing has become one of the top Music Industry go to platforms for Gospel and Inspirational News.  The Belle has interviewed and met with some of the most influential people in the world including Nelson Mandela, President Bill Clinton, President Jimmy Carter, President Barack Obama, Oprah Winfrey, Dick Gregory, Coretta Scott King, Jesse Jackson and many more.

In addition to producing The Belle Report, that is published Monday through Friday, The Belle currently produces and anchors the syndicated radio news show, The Belle Report Entertainment News Update, now airing in 57 markets across the country.
The Belle is also the Mid-Day(10am to 3pm) host and personality on Radio One’s Praise 104.7FM, 100,000 watts, which is the most powerful Radio One Gospel radio station in the country based in Richmond, VA.

Before being hired by Radio One, The Belle worked at Clear Channel Radio, which was then sold to I Heart Radio, which was sold to Entercom Radio, where her talent kept her behind the mic as News and Community Affairs Director and Talk Show Hostess for five 50,000 watts FM radio stations in Virginia, including the top Urban Radio Stations in Richmond and Norfolk, for more than 12 years.

Among her many honors, Ms. Belle was been inducted into the Broadcasters Hall of Fame in 2005, has been honored by the Gospel Music Workshop of America Gospel Announcers Guild, with the Print Media Award for 2007, the Crystal Mic Award, Rhythm of Gospel Awards Print Media, several Community Service Awards and received two appointments by then Virginia Governor Douglas L. Wilder.   She has worked as a News Reporter for BET, WWL TV 4 in New Orleans, WRIC-TV, Richmond, VA, The Light and the Sheraton Broadcasting Network, Health Producer, for the ABC Richmond, VA TV affiliate, and Talk Show Hostess from New Orleans to New York for television and radio.
​
She owns East Coast Gospel Music Summer Fest, The Belle Report Entertainment News Update, Ma & Popop Productions, Inc., The Gospel Times Newspaper, The Belle Report, www.thebellereport.com , LaBelle & Associates (a PR, Promotions and Marketing company), www.FeelGoodGospel.com.
The Belle is also the visionary, creator and producer of one of the largest outdoor Gospel Concerts on the East Coast under the name of Gospel Music Fest with The Belle, now entering its 9th year with crowds as large as 12,000. The Belle has also created Digital Social Media Connect with The Belle to help people navigate through Social Media with a growing response and a long list of host cities.  Ms. Belle also works as a Media Consultant and Publicist for Music Outlets and Independent and national artists.

In July 2016, Ms. Belle was diagnosed with Breast Cancer, however after much prayer and medical treatment, her doctors reported that they were no longer able to find any cancer in her body.  On Saturday, March 18th 2017, The Belle shared her testimony of healing before a crowd of 5,000 at Transformation Expo, one of Radio One’s largest event.
Most recently in 2017 “The Belle” as she is affectionately called, was appointed to the Board for the Baptist General Convention of Virginia.  In June 2017 she received the Empowerment and Recognition Award from Kimberly Towns Ministries and the 2017 Woman of Wealth Trailblazer Award from New Generation International Ministries. In July 2017, The Belle also was recognized by the GMWA Alliance and GAG Sisterhood as a Trailblazer and Media Mogul.  In August, The Belle also served as the guest speaker for Cancer Link, the Over Combers Club and served as the Team Captain for the St. Jude Walk/Run to end childhood cancer.
She is now recognized as one of the most respected multi-media journalist in the country.  The Belle has also become a highly requested Inspirational speaker sharing platforms with Phylicia Rashad, Angela Bassett, Niecy Nash and Bishop T.D. Jakes as she continues to grow her ministry to inspire and uplift others.

As a result, The Belle is NOW doing more speaking engagements in Churches, Music Workshops, Conferences, and Non-Profit Organizations with topics ranging from Ministry to Social Media.