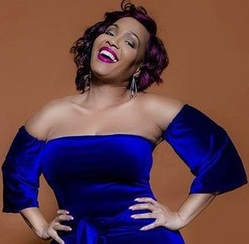 With over a decade in the fashion and entertainment industry, the Inglewood, California native has managed to hewn an unique design language throughout her styling career; taking the fashion and entertainment industry by storm with her riveting personality and exquisite style. Her exemplary work has garnered the attention of celebrity clients such as: Neicy Nash, Lisa Raye, Laila Ali, Stacey Barthe, Kierra Sheard, Morris Chestnut, Laz Alonzo, Darren and Michelle Sproles as well as her sisters, Erica and Tina Campbell, of Grammy Award-Winning, platinum-selling duo Mary Mary, among others.

Atkins dishes out a wealth of fashion information, inspiration, and tons of personality to her viewers with the perfect blend of entertainment and style on her WeTV web series GooRU Styles. Amid the success of GooRU Styles, Atkins is slated to shoot her fourth season of the web series in March 2018. Although style and Goo Goo go hand in hand, she has always been passionate about honing her skills in pursuit of an acting career.  In 2015, she made her acting debut in Emergency Contact a comedy film written and produced by Nicolle M. Whalen and Julia Brewer, where Atkins starred as “Roxanna Biltmore,” a single black female in her 30s who is tired of having to list her mother as her emergency contact. For this role Atkins was nominated for “Best Actress” in the Fan Boy Film Festival. She has also been featured in the following movies In The Spotlight (2017) and Beautifully Broken (2018). Additionally, Atkins has served as brand ambassador for Honda and Marshalls in their national commercial ad campaigns.

Amidst all of her behind the scene success, she is excited about her transition to the front of the camera.  She recognizes that happiness in life is not always visible to the naked eye but has an astounding presence inside one’s self. She is committed to living by her mantra, “Love the light in you and not your name in lights. One yields respect and the other is nothing but smoke and mirrors.”