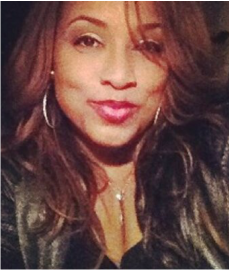 A native of Houston, Texas, Tomeka Holyfield has that crazy, unbelievable kind of faith.

One morning, she woke up from an intense dream that left her drenched as if someone had poured water on her. Tomeka’s Grandmother said that was God telling her to wipe the dust off her feet. You see, Tomeka has always been everyone else’s biggest cheerleader, but she had neglected to develop what God had placed in her.  The dream scared her, but it also gave her courage to do what God told her to do – drop everything and move to Atlanta.

Hearing only that word from God, she left everything and everyone. She had no job, no place to live and no friends in Atlanta. Her Uncle, Evander Holyfield, lived there, but she did not reach out to him. God told her to be still. He had a plan.

Three weeks later, Evander and his staff found out that Tomeka was in town through one of his security guards who was moonlighting at the hotel where she was staying.

God timed it perfectly – the person running The Evander Holyfield Foundation had just been fired for stealing money, and the organization’s annual “Main Event” celebration was just two weeks away. Tomeka was called in to help salvage the     4-day community affair. She turned it into a Gospel celebration and it was a huge success. After presenting to the Board of Directors the following week, Tomeka was named Executive Director of the Evander Holyfield Foundation.

Two months later, she began traveling with gospel music saxophonist, Angella Christie. She worked for both companies for almost two years before becoming Angella’s road manager exclusively for 13 years. It was during her travels Ms. Christie and coordinating celebrity galas for Mr. Holyfield that she noticed there was     a shortage of 5-star, red carpet events and productions in the Gospel Community. She complained about it all the time until God said, “stop complaining and do something about it!”

Tomeka once again heeded the Holy Spirit and produced the first ever Gospel red-carpet event in 2006 at the NBA All-Star Weekend.

Now dubbed the "RED-CARPET MOGUL," Tomeka is President and CEO of RCM Media Productions and the HELPPPP Agency, as well as the creator and executive producer of the “All-Star Gospel Celebration” during the NBA All-Star Weekend, the “Essence of a Woman Gospel Brunch Extravaganza” during Mother's Day Weekend, and the “Gospel Goes To Hollywood Awards Luncheon” during Oscar Week. Next year, Tomeka is adding the Grammy Awards to her roster of signature red-carpet events. Bringing Jesus to high-profile events gives actors, athletes and artists another opportunity to share their testimony about how God brought them through struggles to where they are now. It helps other people to think, “If they can make it, maybe I can, too.”

Derived from her own physical, mental and spiritual struggles, Tomeka created the uCANuWILLuMUST™ motivational series about the power of "Taking Your Life Back." She did it because everybody needs hope; everybody needs to feel they have a chance. Tomeka advocates making the best of what God has given you, and pursuing your true passion. “Don’t do anything just for the limelight,” she cautions, “because to whom much is given, much is required.  You have to be a person of integrity. Whatever situation you’re in, you can, you will, you must overcome it – and come out of it with flying colors.

Tomeka has come through her struggles with flying colors, but not through her own power. “I have an account with an incredible man named Jesus,” she says. “He did so many things for me, even though I made many, many mistakes. I’m the recipient of another chance. Because He did not allow the devil to take me out, I wake up every day on this journey with a heart filled with gratitude.”